I’ve been out fighting a form of Influenza. Don’t know which numbers and letters—N3H2, N1H1…A, B—but it was a hard-fought battle and I remained victorious.

lly it wasn’t a life or death struggle. I was blessed to not develop any bacterial infections. I’d like to think it’s because I’m a preventative kind of person, but it might just be dumb luck.

I know you’re asking why I didn’t get an annual flu shot. I did, but since I got mine in November it wore off before this beast attacked. FYI: flu shots are effective for ninety days only.

Here’s more than you ever wanted to know about influenza and flu shots. If you don’t care, skip down to the important stuff.

Annual Flu Vaccines: My take on these is they are a very good thing. I request the single-dose shots as they aren’t preserved with thimerasol, which is a form of mercury, like the multi-dose vials.

There’s a plethora of material saying thimerasol mercury is a different form of mercury, and won’t hurt people. I am not a chemist, but I do have common sense so when manufacturers have taken thimerasol out of contact solutions and children’s vaccines I have to ask, “Why if it’s safe?”

The CDC says thimerasol is removed under their better-safe-than-sorry policy. I think that’s wonderful. Especially since at times I feel there’s a certain amount of collateral damage acceptable in the U.S. regarding drugs marketed for human use. Right now I’d like to send a huge heartfelt thanks out to the CDC for their interest in pharmaceutical safety. Thanks, CDC!

For more information on thimerasol, check out FAQ’s About Thimerasol from the CDC website.

Aluminum salts. I never condone putting excess harmful chemicals in the body. While I won’t buy foods with aluminum in them as preservatives, I feel use in vaccines—which are a few doses given over a lifetime—is acceptable as vaccine benefits greatly outweigh the risks.

Formaldehyde. This is a non-issue to me. Why? I’ve read when the serum is processed the formaldehyde is “cooked” out leaving hardly a trace. Even if this isn’t 100% accurate at least 21 of our most popular fruits and vegetables have naturally occurring formaldehyde. Actually, the coffee I’m drinking right now probably has more formaldehyde than the flu shot I had last fall.

There are two prevalent types of influenzas affecting humans: A and B. Of the Influenza A, humans get N1H1 and N3H2. FYI: There are 18 different N’s and 11 different H’s—Influenza B is coded differently—but currently the other letter combinations affect only animals.

Annual flu shots include serum for three to four strains each year: N1H1, N3H2 of Influenza A, and one or two viruses from Influenza B. You can check out more about influenza viruses here.

My insurance company picks up all the cost of a flu shot. If it didn’t, I’d still pay the $30 cost out of my pocket. Only next year—after talking with a friend who happens to be a nurse—I’ll be getting mine in early to mid-December.

Homework: Research which months have the heaviest flu outbreaks in your area of the world and coordinate your flu shot for the 90 days covering it. No one can predict 100% perfectly, but you’ll have a good chance of being protected.

I also know you’re asking, “Did you go to the doctor?” No. Here’s why.

Now you’re asking, “So Patti, what do you do to recover from the flu?” You’re not? Sorry, I’m telling you anyway. It’s for your own good.

Let’s talk in the order of symptom severity.

I never run a high temp when I’m sick, even with influenza. No, I’m not lying; that’s just how my body responds.

I know people who run temps high enough I’d freak out, but they say it’s normal for them. And they live to tell about it repeatedly so it must be true.

Even with a low-grade temp if I’m sick enough I have chills. Last week I tried to let my body use the fever to fight off the virus, but after a few nights of no sleep because I felt so rotten, I broke down and cracked open the ibuprofen bottle. I slept better.

Probably the best cough remedy I’ve ever used was suggested by  a dear friend in India. Ginger root. Yep, it’s better than cough drops by a long shot. In India they chew straight ginger root. Being an American girl, and too much of a wuss to go for the hard stuff, I suck on crystallized/candied ginger.

Remember your grandma saying to drink tea with honey when you’re sick? She was right. According to a government study, honey in tea before bed is more effective than over-the-counter cough suppressants. Click here to view the study.

A miscellaneous note on cough meds.

Suppressants stop the cough, but also don’t let you cough up mucus so it sits in your lungs where it can fester.

Expectorants loosen mucus and encourage coughing it up.

If I have a productive cough—coughing up mucus—I don’t take either. If I do use something, it’s usually only expectorants unless I’m in desperate need of sleep then I use a suppressant, but only at night and only for a short while.

with salt water to heal throat abrasions from coughing? I agree; it’s nasty. I couldn’t do it this time around. It made me gag, and I had sore abdominal muscles from coughing so gagging was not a fun place to go. Here enters chicken noodle soup. Part of its magic is the salt in the broth. See where I’m going with this? I knew you would, you’re smart that way.

Plus hot chicken noodle soup breaks up mucus and has valuable nutrition you need when sick. I’ve included an easy recipe at the bottom. Yep, easy enough you can make it when you’re sick.

Menthol chest rub, like Vicks, works great for breaking up mucus caught in lungs. I swear by the stuff. I truly believe using this goes a long way to keeping pneumonia at bay. I also slather it on my throat if it’s sore and wrap a three- to four-inch-wide section of old t-shirt around it.

Try lemon-lime soda with ice. I hardly ever drink soda; I’m a water girl myself. But when you’re sick sometimes straight water just doesn’t do it. Not only does it not sit well on a stomach already filled with mucus drainage, it tastes blah. I drank at least six liters of diet lemon-lime soda when I was sick last week. It felt great on my sore throat and kept me hydrated.

Popsicle are good also because they have sugar for energy, cold for throat relief, and will help you stay hydrated.

When I have a serious cough,

not only does my throat get scratchy, but so do the insides of my ears. Sometimes so badly I can’t sleep. A drop of coconut oil in each ear gives immediate relief. Coconut oil is anti-bacterial, anti-microbial, and anti-fungal so it’s safe. I run hot water over the outside of the container to thin my coconut oil in the winter.

Sometimes my nose gets so dry it hurts. There is a sinus saline gel. It comes in a tube. I put a tiny squeeze on a cotton swab and circle the inside of each nostril. Two cotton swab ends, two nostrils. Funny how that worked out.

If your flu is over and you still have cold symptoms or just a cold, my pharmacist recommended this and it really helps to keep sinus infections away.

Suck on Altoids (or other mints made with real oil of peppermint,  but not imitation peppermint). Use saline nose spray as recommended on bottle for as many days as you need. The mints and spray will keep your sinuses clear. I write my name on my saline with a marker and keep it handy, even just for a dry winter nose without a virus.

Now that we’ve talked about things you can do to stay out of the hospital if you get influenza, here’s a handy shopping list you can highlight and print off.

TIP: Find a shopping bag/cardboard box/something to store your “sick” supplies in after you buy them in October. Store the frozen items in the freezer; just sayin’. When you feel crappy with the flu, you’ll thank me for this tip. And if you’re blessed enough to not get sick, you can use the items that won’t keep until next time over the spring and summer. 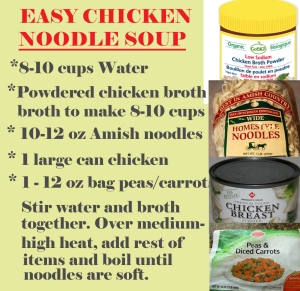 I hope this helps you and your loved ones the next time they are attacked by the influenza bug.

Have a great week-end, and thanks again for following Patti’s Pathways. 😀

DISCLAIMER: Any and all ideas presented in this blog are solely my own. On any health related blogs, I am merely giving advice that seems logical to me after research and investigation. At no time, have I suggested or implied that I hold any medical degrees or certificates related to nutrition, psychological, pharmaceutical, or medical health.

Buy Me A Cup Of Coffee ☕

Want larger print? Hold down the Ctrl key while rolling the mouse's scroll button. It's magic.