It takes a lot these days to agitate me enough to write a blog; there’s so many more dire things happening in the world right now that I hate to be petty.

But I have a tale to tell. A tale of two mice.

The person using these mice lives on disability so his live streaming is more than a hobby. I helped him purchase the Corsair mouse to get by until the Logitech was replaced. The Logitech was purchased with a 4-year warranty so I was in no hurry to return it.

FYI: The gaming mice of preference are the Mad Catz R.A.T. series, but from what I understand they are no longer in production.

As fate would have it the Corsair went out within a few months. He’s now using a $13 Big Lots knock off which isn’t the best, but works.

Here’s where life gets interesting. I first tried to return the Logitech G502. I am still shell-shocked on the hoops they expected me to jump through to return a mouse. Maybe you don’t think it’s a big deal, but I have better things to do with my time than go on a wild goose chase trying to troubleshoot a broken mouse. To my embarrassment I actually did try some of these.

Now for the next email.

This is simply amazing to me, and not in a good way.

And now for the Corsair email exchanges.

The Corsair mouse is on its way back to the factory.

The Logitech mouse? Not so much. After the fiasco Logitech calls customer service for factory warranty mice issues I may wait until the extended warranty kicks in.

Well, tried to comply with Logitech’s request for pictures. They are in .zip so file size isn’t the issue. This may be a Gmail block, but I have a gut feeling it’s Logitech because of the email I received from them next regarding no longer accepting emails.

Received this email today when I tried to send the photos like requested. They can email me FROM this email address, but not receive my reply now? Really? 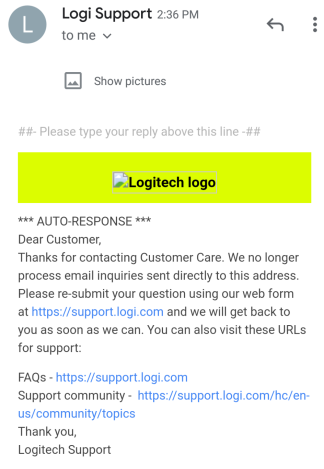 The Next Chapter to the Mouse Saga!

Have a reply from Logitech this week:

And a reply from Corsair:

Lesson learned: purchase Corsair mice, not Logitech.
Thank you, Corsair Customer Service for being easy to work with!

And thank you, readers, for listening. Stay safe and be vigilant!

2 thoughts on “A Tale of Two Mice”

Buy Me A Cup Of Coffee ☕

Want larger print? Hold down the Ctrl key while rolling the mouse's scroll button. It's magic.